In America, there are patches of woodchips and stone gravel in gardens. . The story assumes two  such  of stones and woodchips animated kingdoms  separated by a river. Woodchips have birds on their side whereas stones have insects and ants, Stones protect insects from birds. Ants have fire as weapon to fight birds and chips, whereas birds have water  tor defence. Wood chips are masters in ship and can use ships for attack. Stones can build big towers and throw stones on ships.

Both the stones and woodies habve their own kingdom with castle , houses, roads, gardens and carry on many activities like shopping, playing training etc.

The story has evolved many scenes and events, where Asmi (age 5) took active role and drew sketches, paited stones, and did coding also. The story has a happy end after fierce fighting between the two armies. 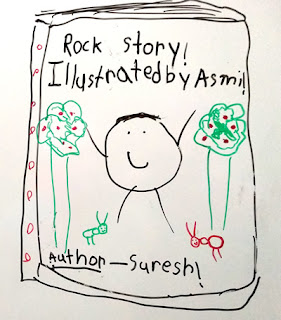 It was midnight dark with raining outside. The sudden  lightening with roaring sound frightened Asmi as she woke from deep sleep and saw the flaskhing lights on window. Her sister was fast asleep. Asmi scrambled up from bed and went to next room where her grandpa sleeps. To her surprise, Aba was not there, she remembered suddenly that he has gone to India. With disappointment she walked back to bed with lingering memory of the rock story, she and Aba had planned. 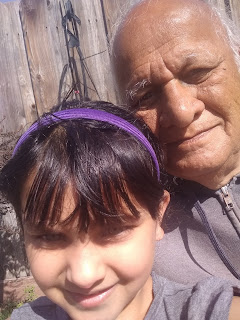 She felt herself to be flying in air sitting on a dragon over the Rocks and Woodies islands with live fierce war between stone and woodchip characters. She remembered the plot and various scenes they had created for the story over many days and she was glad that she herself is participating in the actual movie. 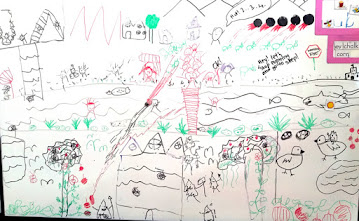 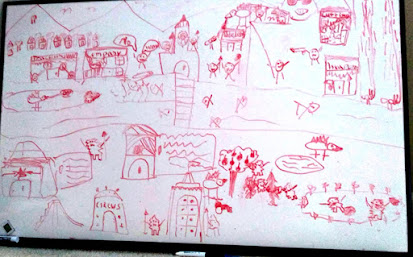 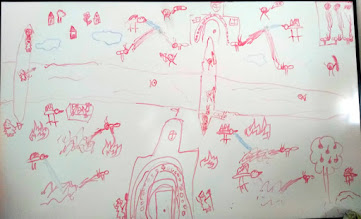 Keep reading to get the idea of movie which is still in process of developing -- Waiting to get more ideas from Asmi.
Posted by suresh ranade at 3:08:00 AM